This weekend I marched.  I marched for the suffragettes who marched so many years before me.  I marched for equal rights for women, gays, latinos, blacks, Muslims….humans. I marched for love.  I marched for religious freedom for all.  I marched in protest of a man in power who is so narcissistic it scares me.  Most importantly, I marched because I’m a proud feminist protecting the future for my daughters.

After a 9 hour journey from Manhattan to College Park, MD, I arrived with my two teenage daughters, my friend (and recently minted American citizen) Marilia, and her two teenage daughters.  Our epic 9 hr journey from Manhattan to D.C.was a clue of of what was to come on the day after the inauguration of our 45th president.  We stopped in 2 rest stops along the way (4 teenage girls get hungry and need to pee a lot!), and in both cases, we found countless friendly people on the same adventure as us, discussing Saturday’s Women’s March. The energy was exuberant. The mood was festive.

When we planned this trip back in November, all the hotels in DC were already booked, either for the March, or for the inauguration.  Since we were 6 people and would need 2 rooms, we went with the recommendation of a friend and decided to book the last cabin available in Cherry Hill Park, Maryland, an RV park and camping ground about 25 minutes from the city of D.C. We arrived well after midnight to our adorable, clean and roomy cabin in College Park, which looks like it would be a ton of fun in the summertime with pools, hot tubs, playgrounds, mini golf and a game room.

In the morning, excited to get to the City for the rally,  we 6 women packed our plethora of homemade protest signs and marched out of the cabin proudly wearing our “Equality” t-shirts designed and donated by Lucky Jade Kids.

As we walked to the cafe for breakfast, we noticed that we were surrounded by RV’s that were all decked out for the Trump inauguration with folks milling about all wearing “Make America Great” caps on their heads.  Our horrified daughters immediately started murmuring their disgust as these New York girls hadn’t (until this point), had the opportunity to be faced with many supporters of Trump.   Marilia and I quickly realized this would be the first lesson of the weekend.   Tolerance.

In preparing for our adventure into D.C., we sat our girls down to talk to them about some protest ground rules including safety, their rights as Americans, and a few “what if” scenarios, and off we went.

Our arrival to the city should have been 25 minutes but took a full 2 hours including waiting in line to get a SmartCard, and taking the Green Line from College Park into Archives station.  When we got out of the metro, we were immediately swooped up into hordes of people singing, dancing, chanting, & marching.  The kids eyes were as big as saucers!  We were all blown away by the enormity of the event. As we made our way from Pennsylvania and 7th to the official meeting spot of the March (on Independence and 3rd) we quickly realized that not only would it be near impossible to get over that far, but it wasn’t even necessary.  While the “official” march was set to go up Independence Ave and make a right on 14th st and then a left on Constitution towards the White House, there was such an enormous turnout, that the marchers on Independence weren’t moving at all.  People spilled over into so many  other streets in the area that you couldn’t turn a corner in DC without having an opportunity to join a march.  We spent 3-4 joyful hours marching, changing routes at will, and negotiating our way around the city.  We encountered thousands of people, saw thousands of signs (some of them very funny), and had thousands of good conversations. 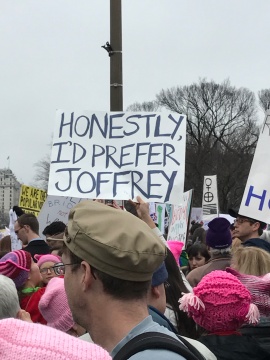 After an amazing meal at a Churrascaria, we ended our day by laying our protest signs to rest, along with so many others surrounding the entire block, outside of Trump International Hotel on Pennsylvania Ave. 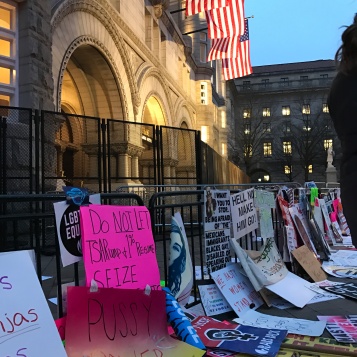 Overall, today was an enormous outpouring of love and solidarity.  A crowd of more than 1 million people had gathered and everyone  we encountered was kind and polite.  Thank you’s, excuse me’s, and sincere consideration were the order of the day.  Police officers were apologizing for inconveniences, marchers were applauding police, everyone was supporting one another in every way.  It was the most beautiful day I have experienced since November 8.  We have lots of work to do, we can only do it if we stop hating and start figuring out how to work together.  Last week I didn’t think that was possible.  Today, I am renewed and excited about the possibilities.  My teenage daughters experienced something wonderful that they will never forget for the rest of their lives. They didn’t always agree with every sign posted and every chant they heard, but they felt the power of coming together with a purpose, and it was intoxicating.   It was the ultimate in teaching moments over and over again.  And a parents dream come true.  Thank you Women’s March for your superb organization and for leading the fight!

• Tolerance – even if people don’t have the same beliefs, it is important not to make judgements.   We need to find the unity and build bridges together.  We cannot move this country forward until we find a way to work together.

• Freedom – We are lucky enough to live in a country where it is ok to fight for what you want.  A lesson so important for the young women of the world.

• Solidarity – We are not alone in our beliefs.  Millions of men and women around the world came together in peaceful solidarity to acknowledge that there is work to be done and we can do it together.

• Understanding – We can express our discontent in a kind, loving, and peaceful manner and still make a difference.  It doesn’t have to come from a space of anger and hatred.

• Women are not the only feminists in this world.  There are so many men out there (in addition to their father) that support our mission for equality and are willing to help in the fight.

Want to continue the fight? The Women’s March has established a 10 Actions/ 100 Days program that is super easy and a great way to stay involved!